Though having have existed since the mid nineteenth century, Cigar Box Guitars only entered into my life about a year ago. I was on an adventure with my Dad as we navigated the endless bargains of the World’s Longest Yard Sale when I locked eyes on a booth selling these beautiful curiosities. I picked one up, strummed the three strings, and the cash instantly began to burn a hole in my pocket. I was ready to hand the man the full price for this archaic masterpiece when my Dad stopped me and bet that I could build one for myself. He said that if I couldn’t, he would find a way to buy one for me, but really wanted me to try first. I sighed, agreed, and the rummaging continued. As we perused the wares of each vendor, I began to start looking for a suitable box. By the end of the trip, I had found two cigar boxes for a total of $3. One of them was as plain as could be and would become my practice box while the other was reserved for a better second attempt.

The first CBG, made from a simple box and garden stake.

A few weeks later and I had done my research and gathered the materials for building one of my own. I stumbled across a video by Glenn Watt, an employee of C.B. Gitty Crafter Supply, and he would become my virtual CBG mentor (I still consider him this way) and C.B. Gitty would become my retailer of choice for some spiffy additions to future instruments. I followed the video step by step with my practice guitar, a garden stake, and some parts found around various tool boxes and junk drawers. After an afternoon of work, I had my first Cigar Box Guitar. It wasn’t pretty, it didn’t sound good, but I was as happy as I had ever been. I had found a new passion.

The next weekend, I went out an picked up some harder wood for the neck since the 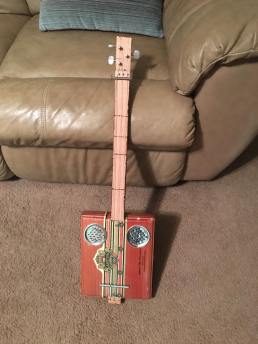 garden stake warped within a few days and got to work on my second box. Ever bit of it was constructed without power tools. I shaped the neck, cut the box, and strung the box. It worked. I decided to take it a another step and cut out a sound hole. It worked even better. I cut a second sound hole and covered them with mason jar lids and the end result was a twangy beauty that made my hair stand on end and produced a grin that didn’t fade for hours.

I had finally done it. I had my own Cigar Box Guitar and proved my Dad’s bet right. I was happy with this instrument, but was a little sad that the process of building was over. Playing it was fun, but I had more fun making it. Rationality said I didn’t need a second guitar, but the better part of my brain said to continue. I went to the local cigar shop, Governors, and bought a couple of boxes. I built another cigar box guitar. And then another one. And then another one! Soon enough I was sitting happy in my living room with four guitars. That is when I realized I didn’t have space to store anymore. And in that moment, the holy wind of Capitalism whispers in my ear, “sell them”.

Thinking back to the money burning a hole in my pocket that day at the yard sale, I decided to post one of my guitars on Facebook at the price I was willing to pay that first day. It sold in fifteen minutes. The bug had bitten me and the other guitars were also gone within the week. With each sale, I purchased a new tool that made the production of the next guitar a little easier and began to streamline my process.

Each guitar is unique, each guitar gets its own sweet attention and care so that the quality of these instruments will reach word of mouth and hopefully the joy I got out of building these lo-fi instruments can spread further to someone as they play them. The money I make from each one is just enough to build the next, but the biggest payoff for me is to see a smile on someone’s face and to know that a functional piece of my art put it there. 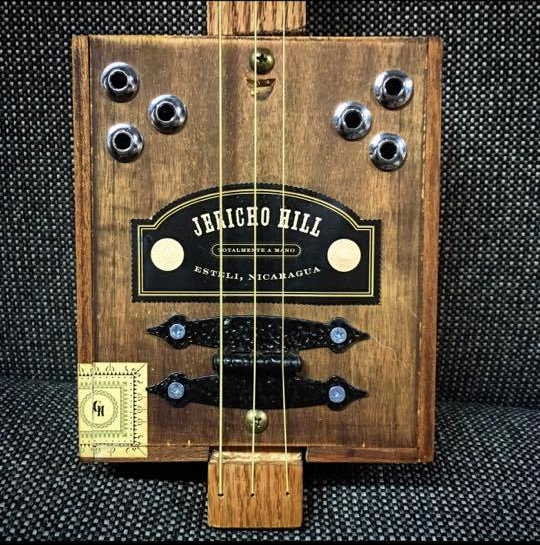 Commission for a friend’s graduation

I do take requests. If you are interested in having one made, please email me at roboski77@gmail.com