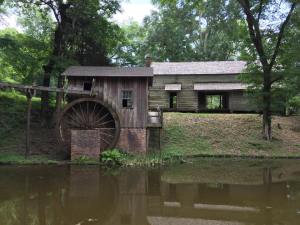 As a native of small town Mississippi, it gets tempting to dream of big cities, bright lights, and year-round entertainment. What I have learned, though, is that if you just stop and look around, you can find a wealth of history, entertainment, and enough good food to last you a life time.

This is the second entry in my Daycation series. After the success of the Vicksburg article, I struggled to think of what should be my next location. I looked at several lists of the best places to visit before coming to the conclusion that the heart of this series is appreciation of things often overlooked. From there, the choice became clear: Port Gibson. Due to the splitting of my time between Natchez and Vicksburg, Port Gibson had been little more to me than a notification that I was halfway to where I wanted to go. This past weekend, I stopped to explore this overlooked beauty.

Founded in 1811 and described by General Grant as “too beautiful to burn,” Port Gibson, Mississippi, was spared from the scars of war for the most part. Coming in from Highway 61 North, my first stop was the Grand Gulf Military Park. This is the perfect park for a Daycation stop to appreciate Civil War history and to get a hands on experience of the Mississippi that was. Sitting about eight miles northwest of Port Gibson on a 400-acre lot on the national registry, the Grand Gulf Military Park is an accesable escape from time itself. For $3 per person, it is also an affordable family destination. The main office doubles as a museum with artifacts ranging over millions of years. There are mammoth fossils, Native American arrow heads, and war relics from every era of American effort. 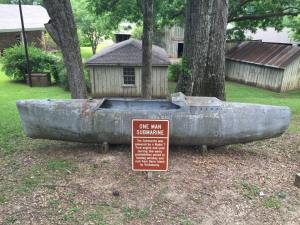 Behind the main office is a barn-like building with antique farm equipment and other artifacts to give you a peek into the life most of us have left behind. It is a neat feeling though to see these old tools and look across the street to see the evolution of food production as a tractor tills the field just a quarter mile away. The next thing to catch my eye was this large, silver, beat up, lump of metal on a pedestal. When you get closer you learn that is is a submarine salvaged from the river, that ran on a Model-T Ford engine, and was used to smuggle alcohol during the prohibition.

The next spot to stop in the park is the old church just a few dozen feet from the submarine. This church holds a special place in my heart because it is the place that my parents got married. I pushed open the 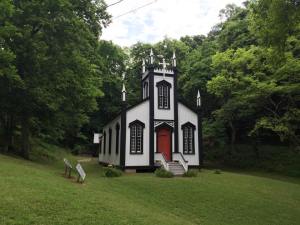 bright red doors and entered a surreal environment. I felt an eerie sense from being alone in this abandoned building and simultaneously felt an almost super natural feeling from standing in the room that ultimately led to my creation.

After the church, go ahead and crank up your air conditioning because the rest of the park is mostly car friendly. The other two stops worth making are the observation tower (which I was too scared to climb) and the remains of Fort Wade, a confederate munitions dump that exists today as a crater due to the soldiers blowing it up to keep it out of Union hands. Please beware of snakes!

Heading into the Heart of Port Gibson, I recommend you just drive completely through it, then turn around and head back north. This is the best way to experience Church St. and the beautiful buildings that gave it that name. The most recognizable is the First Presbyterian Church that bears a giant gold hand with the index finger pointing to heaven on top of its steeple instead of a cross. I pulled over in front of the church for a picture, but trees block the view from the road, so this is another reason to just drive up and down the main drag. 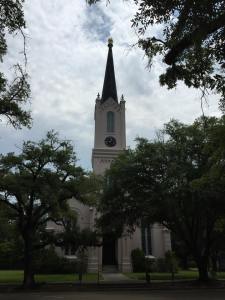 Next, I got off of the main road for the first time in my life and went downtown. I was amazed at the beauty of the buildings and design of downtown Port Gibson, but was equally shocked by the lack of people and businesses. I’m sure you’ve heard the expression about something being called “a shell of what it used to be”, but this is truly the most accurate statement for the area. After parking and walking up and down the roads, I only encountered five other people. The first four where a group of fellow travel bloggers taking photos of the courthouse. By the way, the courthouse is very picture worthy. The building is very 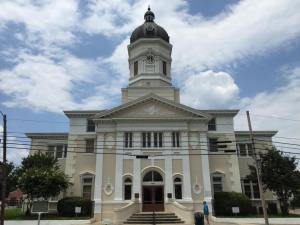 beautiful and photogenic from all angles. The only other person I ran into was a man on a bench asking for money. I only had fifty cents in my pocket, so I gave him that and he seemed genuinely thankful. I sat next to him and explained who I was and why I was there. He laughed as he took the last possible drag of a hand rolled cigarette. I didn’t stick around to ask what was so funny, but before I left, I asked what his favorite part of Port Gibson was. The smile left his face as he went into deep thought and kept beginning to say something before mumbling, “no, no, that ain’t it” and thinking a bit more. Finally he told me that I needed to go see the mural on the side of a building just a few blocks up. The mural he was referring to is a 40 foot long painting of Mississippi’s culture and diversity. This abstract piece of art was a nice little secret that I’m thankful I got to see. Should that picture be the only thing an outsider saw to represent Mississippi, I feel that the takeaway would be as accurate as any Morris or Faulkner novel would lead you to believe: we love food and music.

The final leg of my Port Gibson Daycation was off the highway a few miles south of town. Here, you can take the Alcorn exit to go see the Windsor Ruins. These ruins are as much of a symbol of Mississippi as is a barefoot person in a rocking chair sipping on a Mint Julep. The Windsor Mansion was once a decadent antebellum home that was surrounded by columns. Today, these columns are all that remain after I fire burnt down every last bit of the house in a fire in 1890. Legend says that Mark Twain admired the Mississippi River from its rooftop observation deck, and that the house served as a Union hospital after a soldier was gunned down on the front porch. An overwhelming sense of awe and a tingle on the back of your neck overwhelms your body as you behold this ghost of a home.

The last stop, and the only one I’m deeming mandatory, is The Old Country Store Restaurant just south of Port Gibson in Lorman. This is the business of Mr. Arthur Davis & Sons and the home of the best fried chicken on the planet. Mr. D’s chicken is the best world famous food that you’ve never heard of. Motivated by their family mantra of “continue the tradition”, this old country store is coated wall to wall with antique collectables, business cards ranging from that morning all the back to 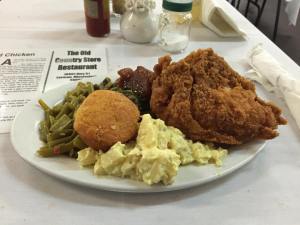 the 1920’s, and the scent of crispy golden-brown chicken that will fill your soul. Be prepared to fight off the elderly on your way to the buffet line, and the legendary fried chicken empowers them to a speed you didn’t know possible as the guests flock to grab as much as they can before that batch disappears. The Old Country Store has been featured on numerous travel shows, Food Network programs, and hundreds of blogs throughout it’s life and I highly recommend you come in hungry because I can promise you’ll leave happy.